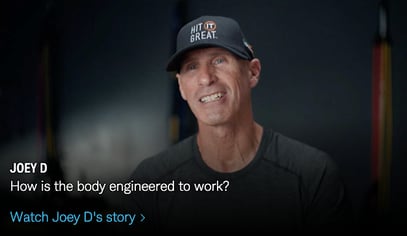 “Every day, my day starts in the dark.”

For those who know Joey “Coach Joey D” Diovisalvi, this is 100% accurate -- an early riser with an energy supply that never runs out.

Which is great, because helping golf’s rising stars and some of the best on the PGA Tour perform at their best is no task for the faint of heart. It’s hard work full of long days and a constant refining of the craft; after all, no two athletes are the same and the body works in mysterious, complex ways.

He leads by example, too. If your coach is working out with you – and was up before dawn getting in a run, bike and a swim before the birds have rubbed their eyes – what choice do you have if you want to get better? [what’s the choice?]

“You’ve got to really bring your A game when you come here, because I don’t have any ability to do anything less,” Joey D says.

Fun fact: Coach Joey D didn’t even intend to get into golf, as he mentioned in his interview with Charles Schwab as part of the 2022 Challengers Series.

Joey D doesn’t care about that. He cares about his players’ desire to improve and it starts with being physically prepared to take on anything.

“Joey certainly wasn’t the first guy to lean on fitness training to help support better performance, but it was not widely adopted,” said Mark Amuso, managing partner of Joey D Golf. “And in just over a decade that I’ve been with him, I’ve seen adoption at the tour level and at the recreational level go through the roof.

“And for professional golfers now, it’s absolutely mandatory. You just gotta do it.”

We’ve heard that if you want to get better, you better be a range rat.

Pound golf balls until your hands hurt. Roll 1,000 putts until your muscle memory is engrained and chip until the lights go out in the clubhouse.

That’s all well and good, but what if your body isn’t ready to swing with speed and power? None of the other stuff matters. The best players in the world feel their golf swing–they don’t think it. Too many thoughts in a matter of seconds is devastating. This is a game played at the highest level by people who know their bodies and what they’re capable of.

Find Your Balance, Then Raise Your Game to a New Level

Joey D’s passion is finding that within people, and then unleashing it.

The proof is in the results. His players have won more than 130 professional golf tournaments and he’s trained three No. 1-ranked players in the world.

Brooks Koepka. Dustin Johnson. Justin Thomas. Jessica Korda. The best players in the world have elevated their games and careers to heights unseen before.

“You can’t have power if you can’t swing and balance, and that’s what people don’t understand,” Joey D said. “But nobody talks about it because it’s not cool. It’s cool to talk about hitting a drive 400 yards. So it’s the thing we start with. That’s the first link, when we’re done with the table assessment and how the bones are moving and joints and muscles.

“The balance is huge. Because if you’ve never worked on it, once you do, then all of a sudden you realize, gosh, I swing so much more efficiently and my swing speed increased, my ball speed increased, my smash factor increased. All the technical stuff starts to come into play, and that’s kind of cool. They’re winning more, they’re placing higher in events, they’re more confident than ever, and there’s less injuries. And I think when I look at that as a coach, that makes me believe that the work I’ve done over the last two and a half decades has made a difference.”

Watch the full video on Joey D in the Charles Schwab Challengers series at charlesschwab.com.