Increase Golf Ball Speed the Smart Way with These Drills 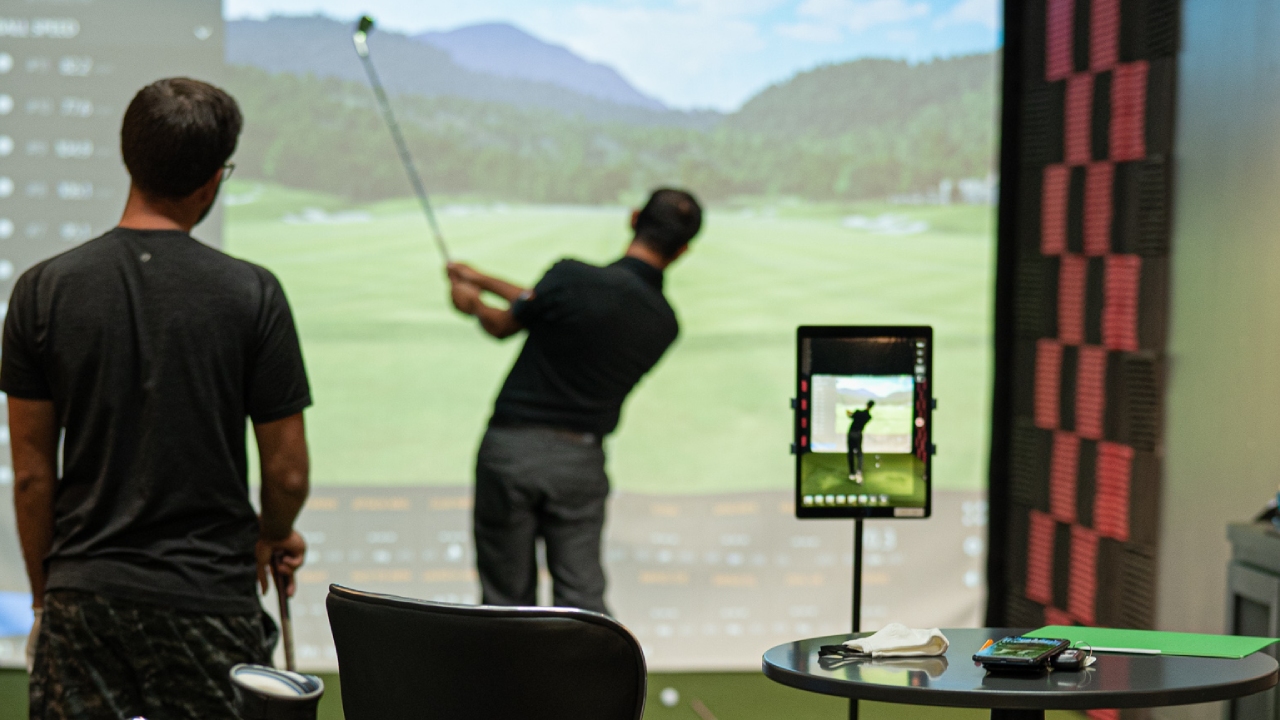 Bryson DeChambeau swings the golf club really, really hard. Should you be doing the same?

The ultimate degree to which you’ll be able to answer that question is going to depend on who you are as an athlete and on your level of golf skill. If Bryson’s approach keeps producing Tour wins, people are going to want to emulate it – and, being honest, who doesn’t enjoy a little show of swagger over being the long ball off the tee when you hit the course with others?

Because of what Bryson is doing to golf balls and golf courses these days, everyone is talking about swing speed. But adding mphs to your swing isn't going to do much for your golf game if you can't control that speed. Bombing it 300-plus yards isn't all that impressive if it's 300-plus yards into the woods on your right or the water on your left.

Bryson’s ultra-aggressive technique has produced club head speeds as high as 147 miles per hour with a driver. Retief Goosen, the longest driver on the PGA Tour Champions circuit last year, tops out at about 115 MPH, which, even though he is in his 50s, is close to the overall average also seen from the typical PGA Tour player. The leader in drive distance among women professionals on the LPGA Tour in 2019, their last full year of competition, was Anne van Dam, who combines a strong 5'11" frame with classic fundamental positioning to produce swing speeds around 110 MPH.

DeChambeau, Goosen, and van Dam all have significant differences in their swing mechanics. But what they have in common is, they have each identified a formula for producing the highest speed numbers from their own individual physical potential. Using that same lens to evaluate yourself is the path that will lead to your sweet spot in gaining productive speed.

Hit IT Great’s Coach Joey D has seen it all, working with multiple world No. 1s -- including long hitters Dustin Johnson and Brooks Koepka -- along with thousands of golf enthusiasts of more modest abilities. Golf is always a game built on fundamentals, no matter the player, so here he shares a couple of his most proven approaches for opening the door to better swing speed.

One of the things that's going to prevent you from swinging faster is if your set-up at address is too narrow. A wider base will give you more stability and balance. That added sense of balance is going to let you move your body faster -- and swing the club faster -- without losing your equilibrium.

To strengthen the stabilizers in the hips that'll let you swing with a wider set-up, stand at address in an overly narrow set-up. It'll feel weird, but it's supposed to. 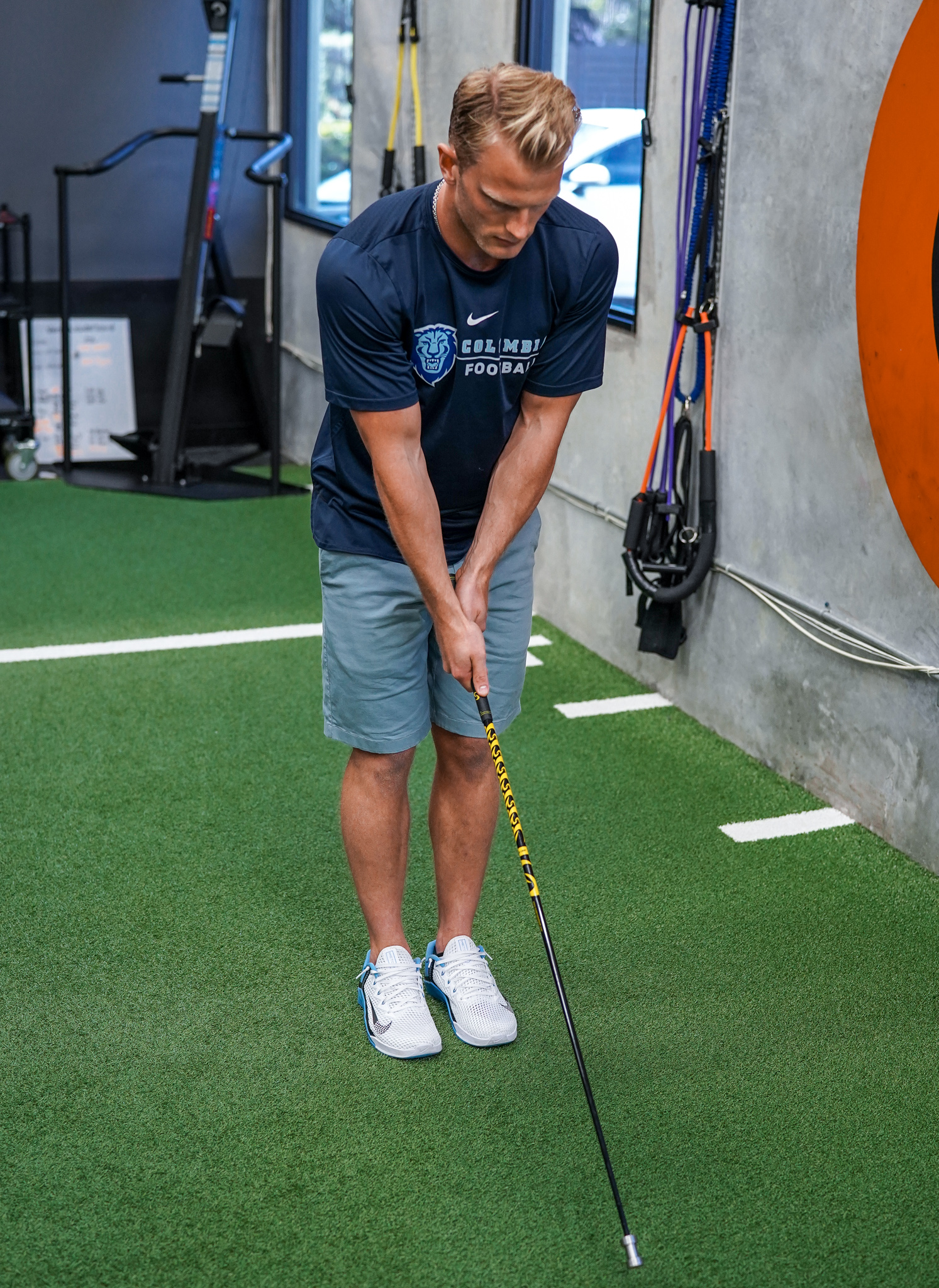 From here, step your back foot out into a slightly wider than normal width set-up. You should feel a bit of tension on the outsides of your hips. As you're stepping out, slide your right hand down the club until it reaches the head and the club is at waist-height and parallel to the ground. 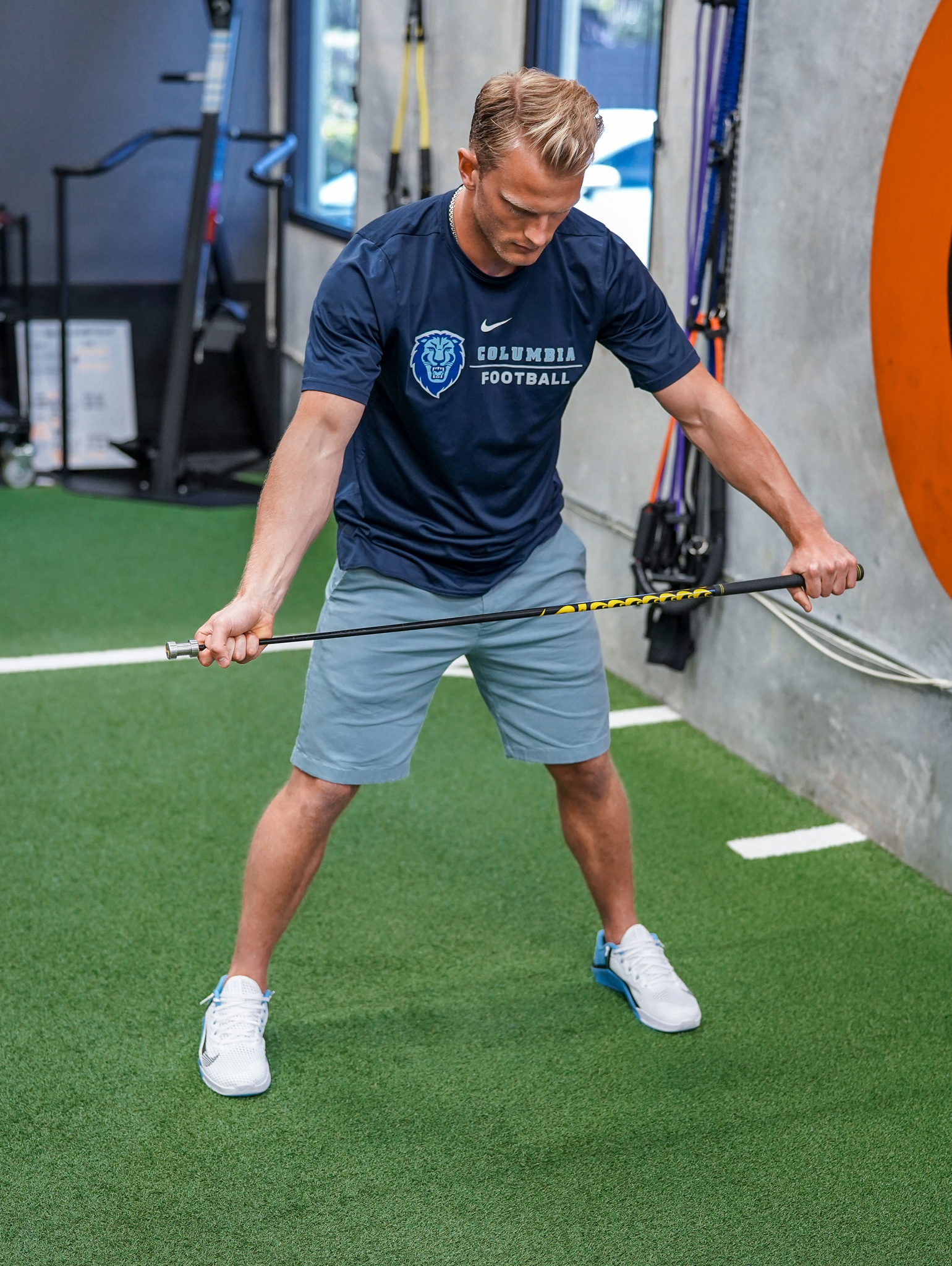 Now, rotate back as if going into your takeaway. The deeper you rotate, the more awareness you should feel on the outside of your right hip. 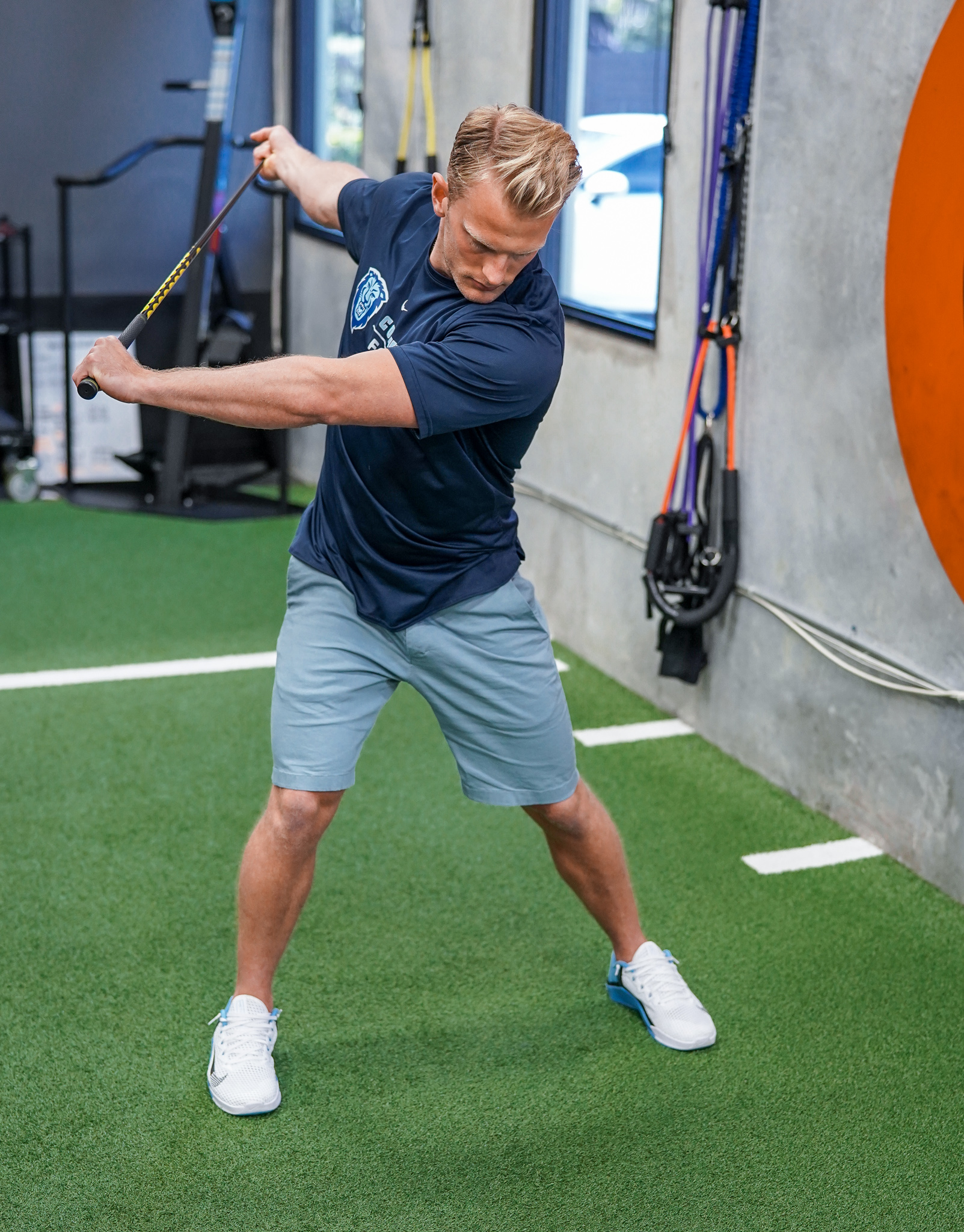 Do ten repetitions and then perform the same move rotating in the opposite direction. This will help to strengthen and stabilize the muscles of the hips on the other side of your body to let you stay balanced and stable in your follow-through.

Now that we've prepped your lower body to handle a faster swing speed, let's focus on the upper body. In addition to getting the upper body to physically move faster, we can also boost swing speed by opening up the chest and shoulders to allow for a deeper takeaway and follow-through. This drill does all that!

Start in an address-like position holding the club in front of you, parallel to the ground, at chest level with palms facing up. Rotate back into your takeaway -- and because your hands are separated by the length of the club, you'll get a deep stretch into your chest and right shoulder. From the top of your backswing, dynamically rotate as if you were going through your downswing into impact. The movement will almost feel like you're chopping wood. 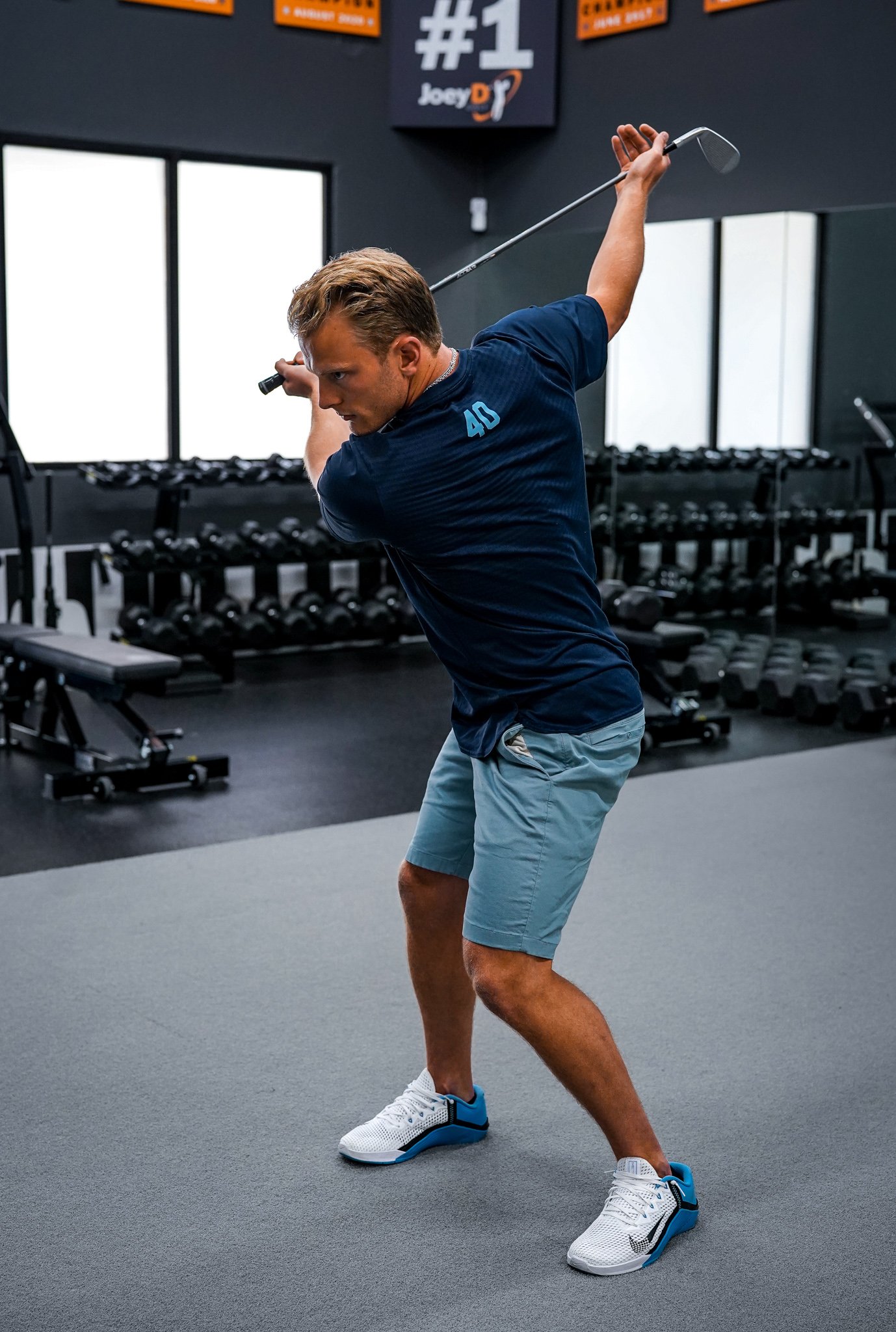 Do ten "chops" and then do ten reps reversing the motion -- loading into your left side. This will prep your upper body for a deep follow-through while continuing to work on overall swing speed.

Continuing to work on these drills over time will help you truly feel that extent of your functional range of motion in your golf swing. Learning where those maximum points are for you will be a key to being able to consistently produce the best swing speed your body is capable of generating.

Whether you're brand new to golf or you've been playing competitively for decades, our Hit IT Great training programs will have you hitting the ball longer, faster and more accurately than ever before. So get in on the action and get your first golf workout for free! All you need is a little free time and you'll be able to do all of these exercises at home on your own! Just click on the Programs tab at the top of the page and get started with a golf fitness program that'll let you play the game the way you always wanted to.